I apologize for the slow pace of updates for Developer’s Backyard. The previous volume was released last October…
Looking back on the past few months, the biggest development was the addition of the new character Happy Chaos in October.
We’ll look at him in detail later in this volume.

In December, GGST won the award for “Best Fighting Game” at The Game Awards 2021 event held in Los Angeles. We are honored to have received this award. It’s truly thanks to the support from all the players. Thank you, as always.
https://thegameawards.com/nominees/best-fighting

In this volume of Developer’s Backyard, I’d like to introduce Happy Chaos and Baiken, as well as touch on the update planned for January 28. Be sure to read until the end.

Although he made his first real appearance in GGST’s Story Mode, he’s an incredibly important character in the GG series.
Players familiar with the Story Mode likely have a strong impression of his quest for drama and his many unfathomable actions and words.

The new lines in his Arcade Mode and Respect action (→ + Taunt button) show his inner mental state not seen in the Story Mode.
If you haven’t tried these out yet, please do!

Despite his attitude, he’s a top-level magic user… or rather, he’s the very first magic user, but when it comes to martial arts, he’s a complete novice with no training.
We kept this in mind for the game, aiming to create movement that shows he is a novice at fighting. Keep an eye out for his unique animations. 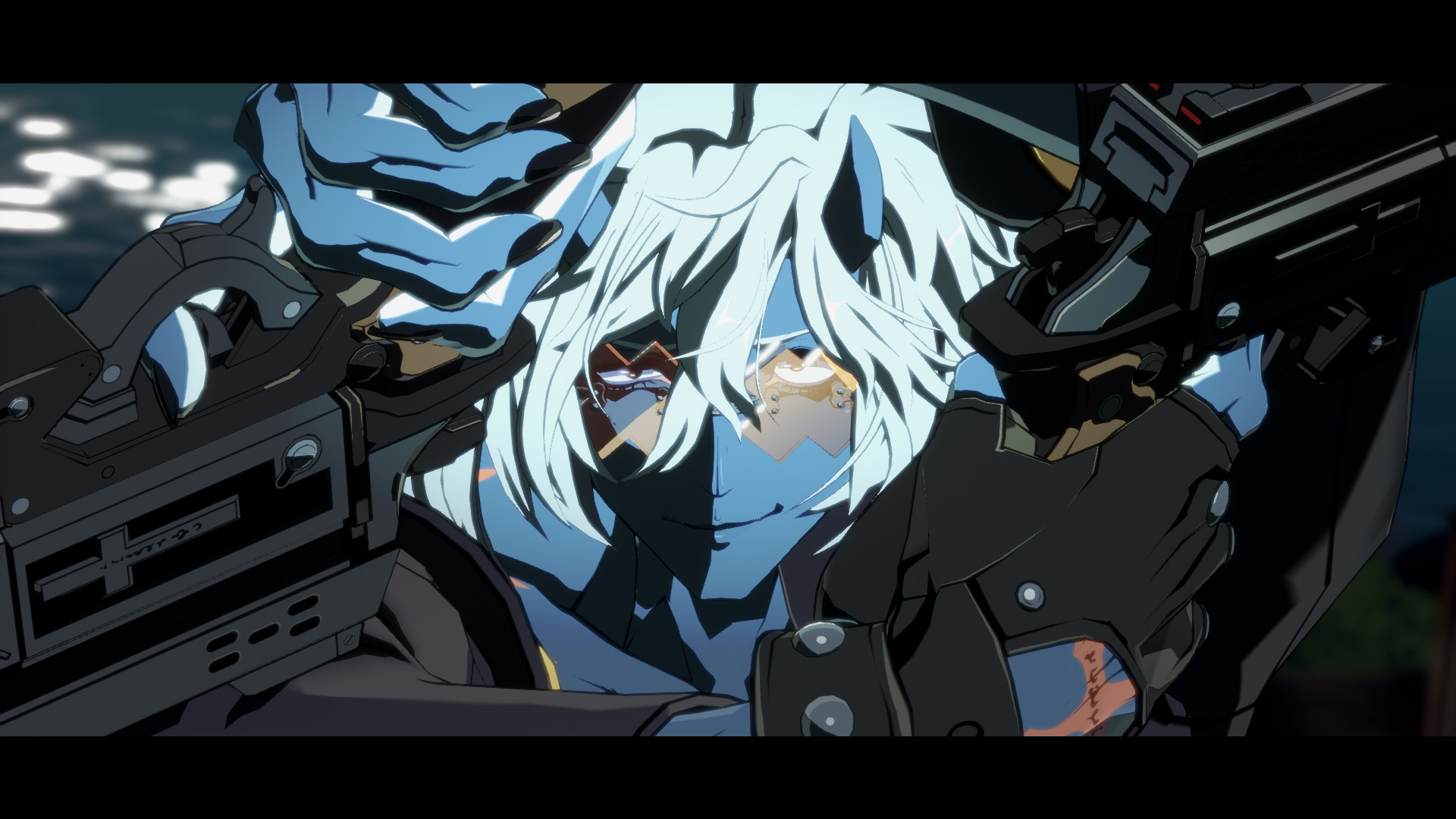 When it comes to play style, he’s a tricky character who can ready his gun or fire with the press of a button.
You can restrict your opponent’s movement while keeping them under pressure with his gun shots, as he can accurately and quickly fire at them no matter where they are on the screen, from any distance.
A major distinguishing feature would be that he can use these stances and shots simultaneously with a variety of actions.
In addition to cancelling normals into specials like other characters, he can ready his gun and fire during an attack, for example.
You can use this to ready the gun while Chaos is vulnerable, and stop the opponent’s punish attempt, or to cover when your turn would generally be over.
This is a very strong option that can be used for both offense and defense.

However, this requires the player to manage his “Concentration,” which depletes as he readies and fires the gun, as well as “Ammo” which depletes with each shot fired.
These can both be restored with certain special moves, but the gun cannot be readied while those moves are active.
Since the gun can no longer be fired when either one of these resources runs out, it requires planning to continuously use his powerful gun shots.

To be frank, he’s a difficult character to play, but he offers a uniquely fun experience. Please give him a try for yourself.

Wielding her opponent’s strength as her own, the unfaltering samurai

Baiken is one of the few surviving Japanese people after the country’s population was nearly entirely decimated. She is a wandering swordswoman who travels the world.
She’s been popular since past titles, and we received many requests for her addition to the roster.

She fights with powerful sword attacks as well as a variety of concealed weapons, and has many unique moves in her arsenal.
Her pre-battle introduction takes a different direction than that of the rest of the cast, so keep an eye out for that. 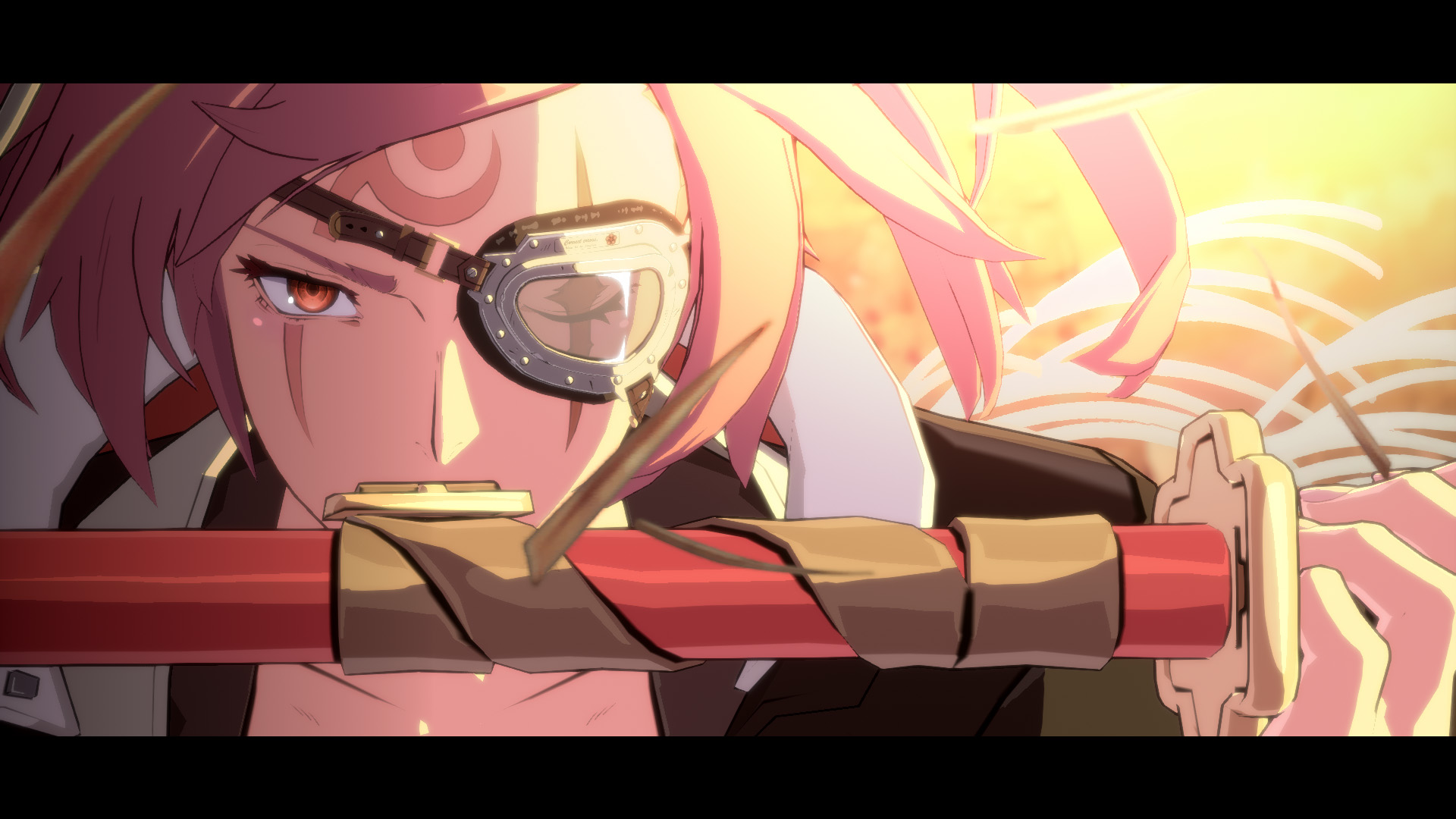 When it comes to her play style, she is an all-rounder with well-balanced moves for both offense and defense, with especially useful special moves.

Tatami Gaeshi is useful for close-range strings and maintaining offense. Kabari boasts excellent range and draws the opponent towards Baiken. Youzansen works well to mix-up blocking opponents. Hiiragi counters the opponent’s attacks at close range, dealing major damage with a counter-attack.
Although the window in which you can counter an attack is incredibly short, meaning it isn’t easy to go for, it works well as a means to take back momentum. 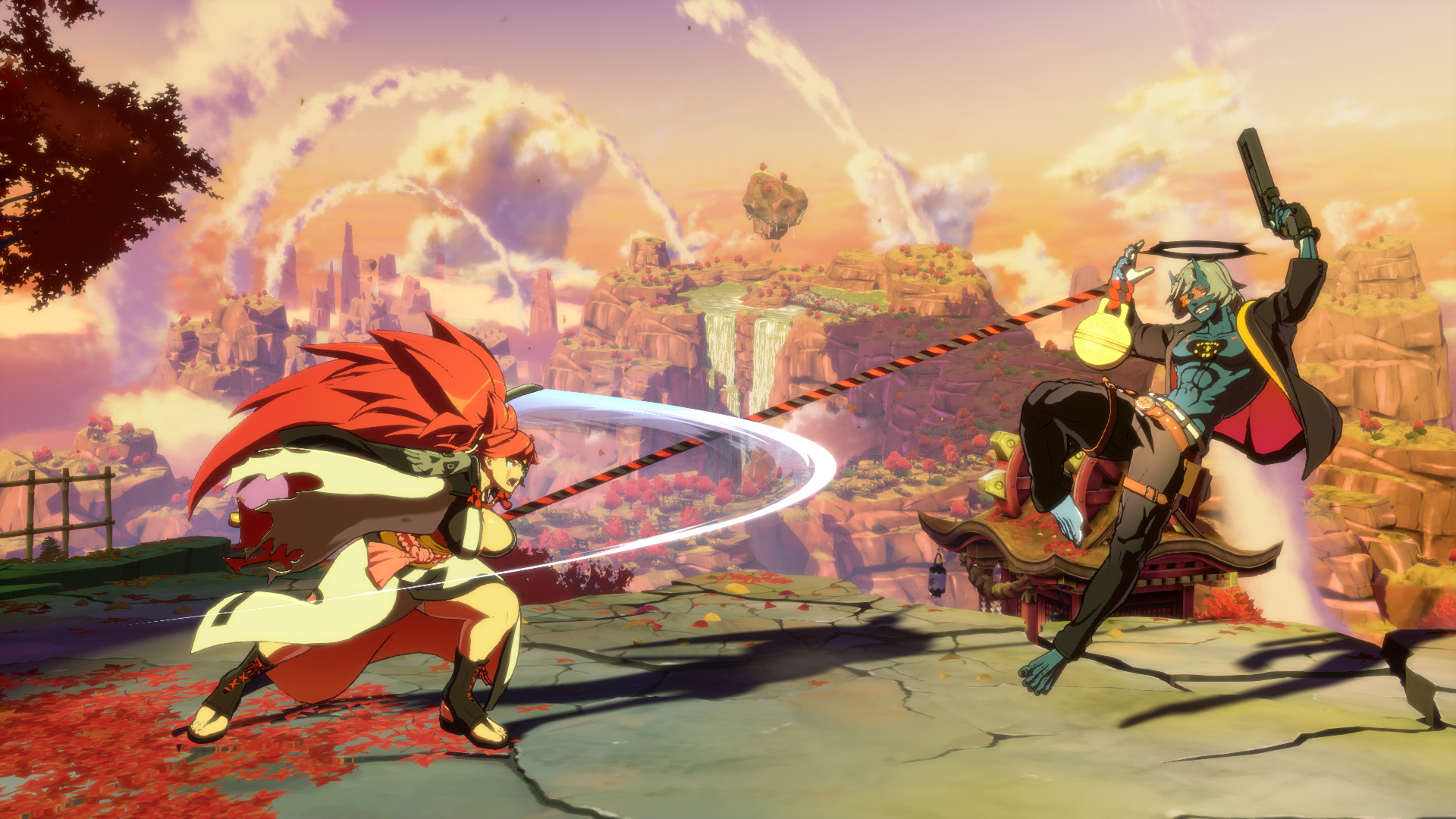 Baiken shows her true potential when close to the opponent.
Whether she is on defense or offense, she can put pressure on the opponent as long as she is in close range.

Also, her grounded throw and certain other attacks can link the opponent to Baiken on hit.
In this condition, the characters are drawn in towards one another, making it easier for Baiken to take the advantage due to her strong offensive and defensive options at close range.
This also opens up new potential strings and set-ups for her, so be sure to lab it out.

I’d recommend for anyone playing against Baiken to also go into Training Mode and try out a variety of options.

As announced previously, the January update is planned for January 28 (Fri).

In Combo Maker mode, you can share combos you’ve made with players around the world, as well as try your hand at combos made by other players.
Although the name is “Combo” Maker, you can also share mix-ups, setplay, etc.

You can use tags for combos to make them easier to find in searches.
It’s easy to find combos you’re looking for, as there are tags both for the in-battle state such as “100% Tension Gauge” or “Close Standing S Starter,” as well as category tags such as “Beginner Friendly” or “Flashy Combo.”
We’ve also prepared a system that automatically chooses recommended combos for the player, so you should be able to find a good combo for you.
Please enjoy diving into the endless ocean of combos.

New Stage: Lap of the Kami

The word “kami” in the stage name refers to the Japanese word for “gods.”
Between the tatami mats layed out, the foxes taking the shape of Shinto priests, the foliage of the sprawling trees, and the clear night sky, the imagery brings to mind Japan and Autumn.
The theme of “Lap of the Kami” is dusk. In a world of eternal twilight, gods in the form of foxes proceed to the inner sanctuary across the bridge to receive the shrine’s seal.
The gods return to their original location after receiving the seal. Some of them carry flagstaffs with the seal on them.

The scenery and color scheme of the evening and foliage are distinct from other stages.
We put a lot of work into the transformation of the foxes especially, so it should be fun to watch over and over again.

The major official tournament series held by Arc System Works, ARCREVO, is currently underway!
Guilty Gear -Strive- is the title for this year’s tournaments, which are divided into three regions to maximize the number of players who can join: Japan/Korea, North America, and EMEA.

Qualifier tournaments started last year for the North America and EMEA regions, with intense battles in each event. The qualifiers and finals for the Japan/Korea region will be held in February.

For the North America region, don’t miss ARCREVO America Finals that will take place March 19, 2022. Players will compete at Esports Engine’s Burbank studio in California, and the event will be broadcasted for fans on the Arc System Works official Twitch, YouTube, and Facebook.

Please see the
ARCREVO 2021 Official Website and access the page for your region to learn more about the rules and how to enter.

That’s all for Volume 9 of Developer’s Backyard.
Thank you for reading to the end.