Did you catch the “Guilty Gear News Live Special” event last month?
We announced a lot of info about Guilty Gear -Strive-, such as the new character Giovanna joining the roster, and the game’s release date.
You can find a summary of the announcements on the official site, so check it out here if you’re in a hurry.

With that out of the way, let’s begin.
As always, we’ll share the latest news from the development team, including our intentions and future plans, to create a dialogue between us and the players.

Before answering your comments and questions, in this volume we’d like to share the background and concepts behind Giovanna and Nagoriyuki. This is new information that didn’t make it into the live stream on October 11th. 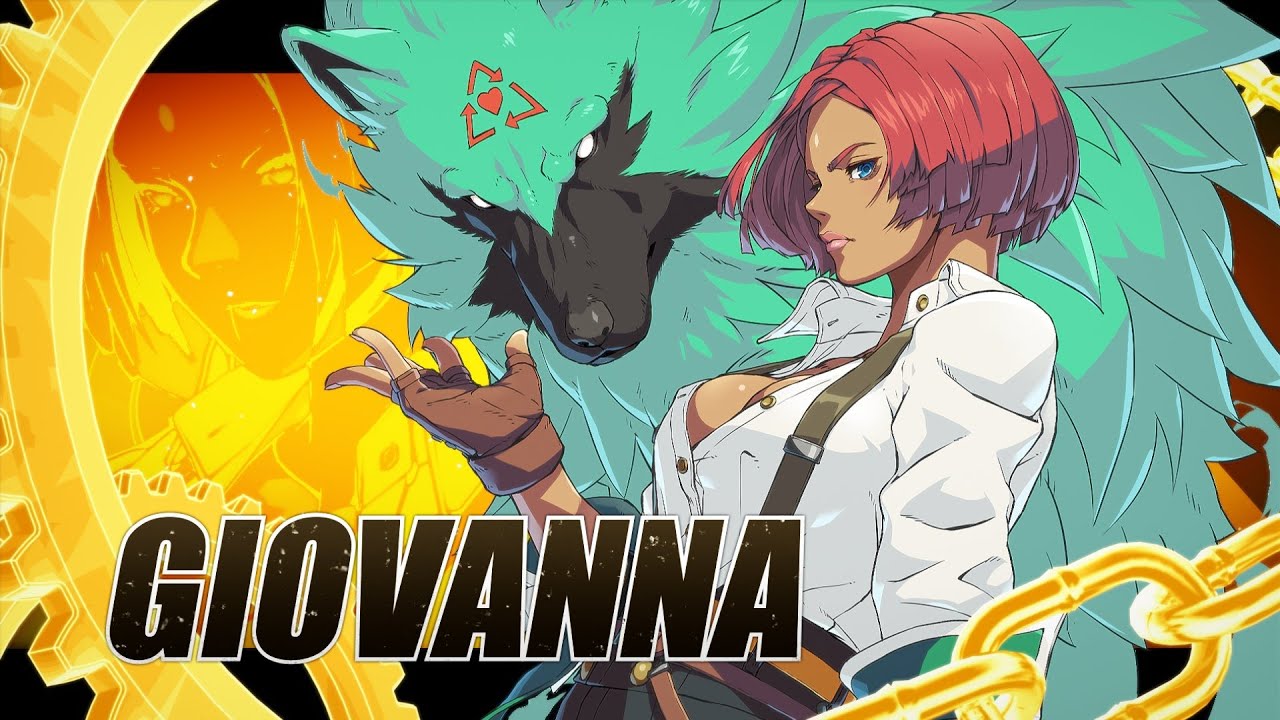 She’s an officer in the special operations unit that protects the President of the United States.

She’s careful with her words, but still manages to come off as rude and irreverent due to her attitude.
Deep down, though, she means well. She’s especially friendly with children and animals.
During battle, she allows her wolf spirit companion “Rei” to possess her and amazes her opponent with inhuman speed. 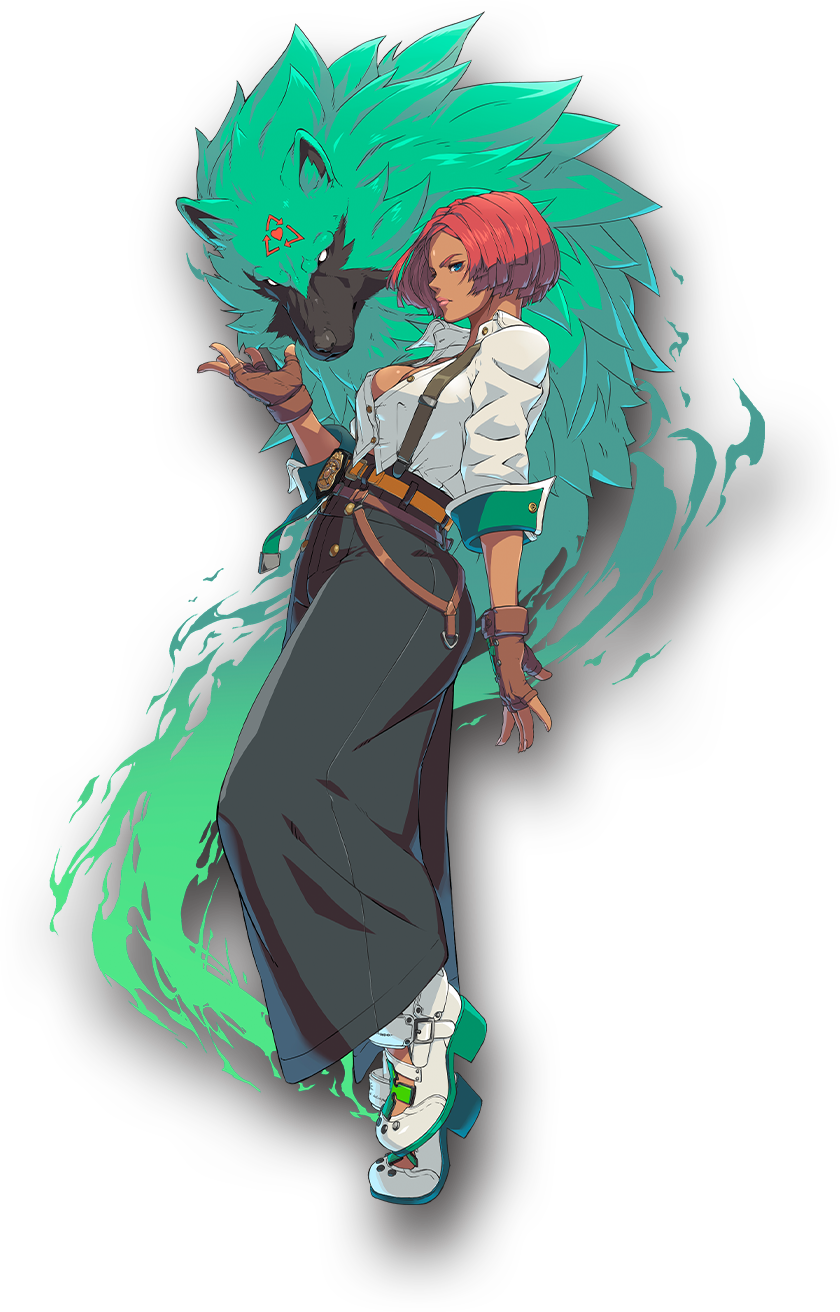 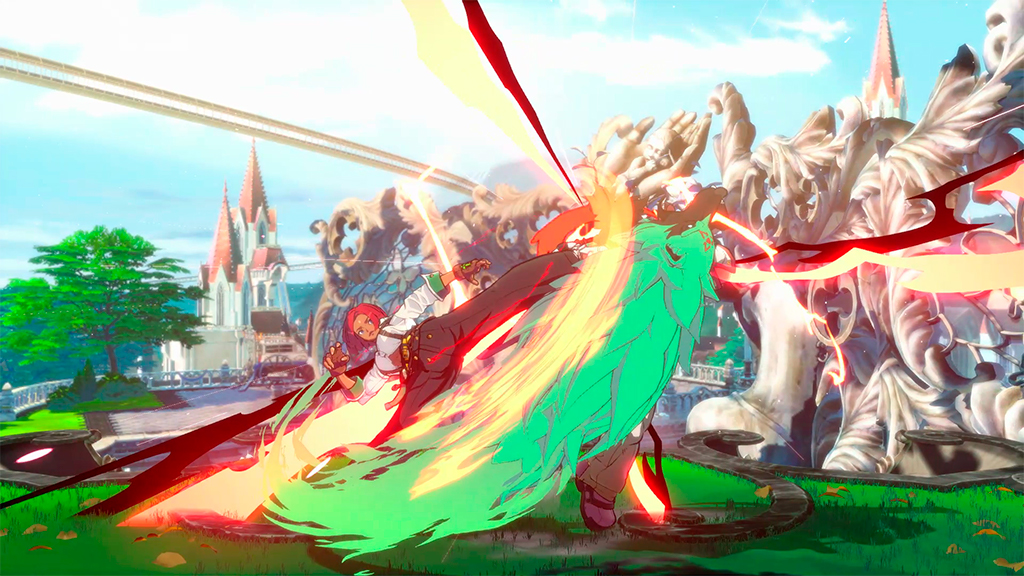 Despite working as a special forces officer for the President of the United States, she comes off as lazy.
Due to the unique environment she grew up in, she can also be a bit lacking in social skills at times.
However, as mentioned in her profile, she’s actually a very kind person, and when push comes to shove, she handles matters as a professional.
Her spirit wolf companion, Rei, is like family to her, and fights at her side. By the way, Rei is a girl, too.

Let’s take a look at her capabilities in battle. As her description “Incredible rush-down that can break down any defense---a super-powered special forces officer for the President” implies, she specializes in close-range combat.
She can claim victory by closing in with her fast movement and locking the opponent down with her powerful offense.
On the other hand, her short range can make it difficult to get in on the opponent.
Try using special moves that launch Giovanna forward to approach.

Her controls feel natural, making her a good choice for players new to fighting games. (We know we say this a lot… but it’s really true!)
Also, she has a unique mechanic which increases her damage output as her Tension Gauge fills. 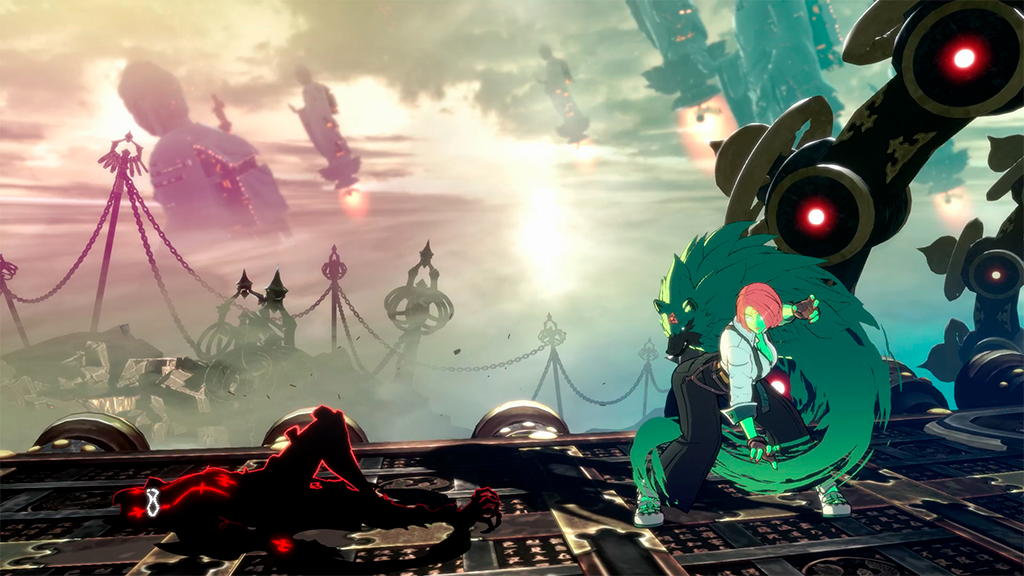 Did you notice the brief hint in her announcement trailer? She looks different here.
As of now, this feature is not something that alters her controls or how she fights. To be clear, she is not a “mode change” style character.
For new players, this grants a benefit even if they don’t use their Tension Gauge.
For veteran players, this opens up a unique opportunity for strategy concerning how to use meter, exclusive to Giovanna.

Next, let’s look at Nagoriyuki. We kept everyone waiting for details about him for quite a long time after his initial announcement. 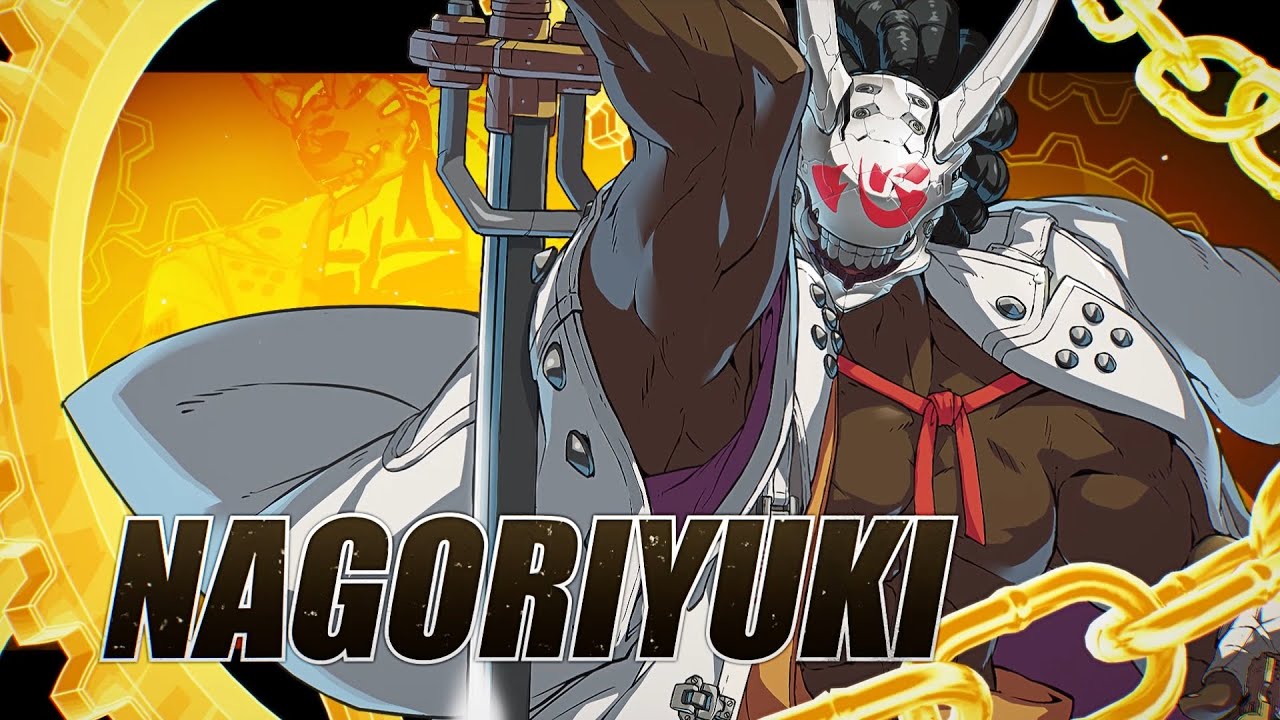 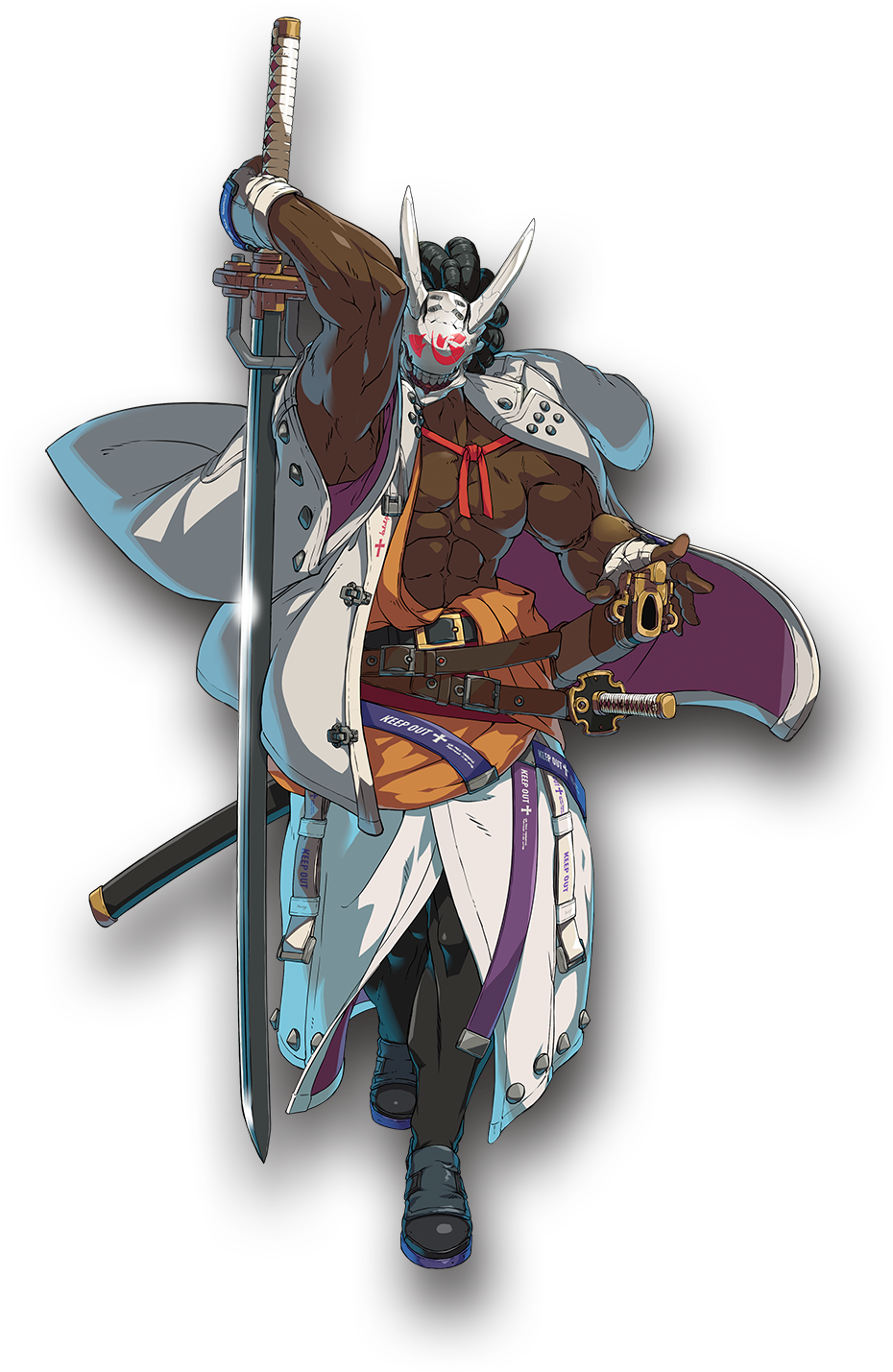 His description is “A noble vampire samurai whose vampiric blade delivers devastating blows.”
As you can guess from his appearance, he’s a power-hitter whose attacks deal heavy damage.
Although his attacks deal great damage and have good range, he can’t dash or double-jump.
Try using super jumps or his fast movement special move “Fukyo” to approach the opponent.

One of his main unique features is his ability to use one special move after another.
This allows him to launch an incredibly strong offense. Each time he uses a special move, however, he begins to thirst for blood, meaning the “Blood Gauge” fills up.
The gauge filling up grants some benefits, such as increasing the range of some of his normals. However, when it reaches max, Nagoriyuki goes berserk and forcibly switches into the “Blood Rage” state.
The animation as he enters this state leaves Nagoriyuki vulnerable to a painful counterattack from the opponent.

Also, landing his command grab special move “Bloodsucking Universe” causes the gauge to continuously decrease for a set amount of time. This means you can keep up your offense for longer than usual.

During the “Blood Rage” state, Nagoriyuki can’t use special moves and takes damage. On the other hand, his normal moves’ range improves greatly, and he gains access to an exclusive Overdrive.

During the live stream in October, the pro-gamer GO1 played Nagoriyuki.
He pulled off truly impressive moves despite only having two days to practice.
Be sure to check it out if you haven’t already.


We’re working to have Giovanna and Nagoriyuki playable in the “arcade version pre-release test”(For Japan Only) and “pre-release playable demo (open beta beta test)” for consoles planned for early 2021.
Please hang on until then.

Has the ranked match system really been removed?

A.
There is no ranked match mode. That function is now fulfilled by the Online Lobbies.
There are separate lobbies, one with multiple levels that have restrictions based on the player’s skill level, and one with no restrictions that anyone can enter.
*We’ll discuss player matches elsewhere.

Our goals with the previous Ranked Match system were as follows:
1.Players match with different players depending on their skill level
2.Players can practice in Training Mode while waiting for a match
3.Players feel motivated to improve because they get evaluated based on their skills and match results
These goals will be met by the Online Lobby.

Our reasoning behind including it in another mode is that we want to avoid the player base being split between different modes. By doing it this way, the players will congregate in one mode, making it easier for everyone to enjoy matches with players close to their skill level.

With previous titles, there was a tendency for players to gravitate towards modes that didn’t impact their ranking until they improved at the game.
We want all players who pick up GGST to be able to enjoy playing matches online, so we’ve prepared features that make it possible for everyone to match with players close to their skill level.

One of our concepts for GGST is to make a game that is fun to play, whether you get deeply into it or not, both online and offline.
While the game has mechanics worth delving into, such as deep techniques and mechanics intended for advanced players, having a matching system that pairs players appropriately means that players of all skill levels can learn how fun fighting games can be.

I have a question about online matches in the new game.
Will there be a ranking system or other similar system in Strive?

A.
There is a system that restricts the lobbies players can enter based on their skill level.
While similar to the previous ranking system, this is a renewed version of the prior concept.

As mentioned earlier, our goal is to provide a fun experience for a wide variety of players. Our goal is to solve the issue of players avoiding matches due to being overly concerned about the fluctuation of points or maintaining their win ratio. Players can then enjoy matches with others close to their skill level, creating a situation where they don’t lose anything even if they don’t win a match, and can avoid matching with players at a different level.

As we felt the previous system didn’t accomplish this, we felt it was necessary to attempt something new, such as merging the modes.
We’ve also included systems other than points so that your floor placement is determined not only by the results of your matches, but by the contents of the matches as well.

In the console version of Xrd, player rankings were only affected by ranked matches.
What are the plans for the system in GGST?
Personally, I’d be happy if there was an option for long sets, rather than only BO3, that would impact your ranking.

A.
We don’t currently have plans for long sets that impact your rating.
I also enjoy that system, personally, but having rankings impacted by repeated matches between the same players could potentially disrupt the balance of the ranking system.
However, we have plans for a point and ranking system separate from matchmaking that allows players across the world to compete with one another. We’ll share more information about this system at a later date.

In the previous game, I felt there was an issue where too many players reached the highest rank, and those players would stop playing ranked matches. Do you have any thoughts on this? Thanks for your time.

A.
In GGST, there is a special floor only for players with truly top-class skills.
This floor has a special system where players lose the right to enter unless they maintain a certain record within a determined time period.
We’ve designed it so that players can feel proud if they manage to reach and maintain their position at the top level.

What are the plans to ensure people can match AND rematch as quickly as possible after booting up the game?

A.
It’s possible to wait for a match in Training Mode under certain conditions set by the player, going from the main menu without having to enter the Lobby screen.
After the match, players return to Training Mode without a loading screen, making it possible to begin searching for their next opponent quickly. This means that players who want to get in as many matches as possible, as well as those who don’t enjoy moving around in lobbies, can use this feature to play stress-free.

I am curious about the lobby system. Xrd’s lobbies as well as those in other ASW games had miniature arcade cabinets and battle kiosks to organize players into separate areas and allow them to identify whether or not a match is going on. However, Strive’s lobby moved away from the kiosks and allowed players to begin matches wherever they wanted. This unfortunately resulted in large crowds forming in a single area to the point where no one could tell who matched up with who during the closed beta testing event. May I ask what was the idea behind allowing players to freely match up anywhere?

A.
We’ve had the idea of letting players match freely by coming into contact with other battle-ready players, without using something like an arcade cabinet, even while making prior games.
However, as I’m sure you all know, during the closed beta test, this caused many issues and it was difficult to initiate matches as a result.
We’d like to apologize once more for this.

We’ve reworked the system after the closed beta test, and currently battle-ready players move to a fixed position in the area.
You’ll be able to see how it works during the next beta test.

We know that Strive will have crossplay between PS4 and PS5, but we don't know whether PC will join in to create a unified playerbase. Members of ASW have stated that they want crossplay to become a standard going forward, so what is Team Red's feeling and current situation on PC/PlayStation crossplay in terms of Strive?

A.
We’ve received a lot of requests from the players regarding implementing crossplay between the PC and console versions.
However, there are many problems that need to be overcome before it can be added to the game. At this time, we’ve decided not to implement crossplay on release.
We are, however, looking into implementing it in the future. I hope you can support the game as we work towards crossplay implementation.

About Future Volumes of Developer’s Backyard

That’s all for Volume 4 of Developer’s Backyard.
Thanks for reading to the end.

The next trailer is scheduled for release on the new year date(Jan. 1st), so stay tuned!