In this first post-release volume of Developer’s Backyard, I would like to introduce the new playable character Goldlewis Dickinson and address future updates.
Be sure to read until the end.

Some of you might recognize him from his appearances in the Story Mode.
He’s the American Secretary of Defense, a mainstay of the nation who has earned the trust of those around him. His hobby is searching for and collecting unidentified organisms, and a mysterious life form is contained within the large coffin he uses as a weapon.
Be sure to try out his Respect and Taunt commands to enjoy the variety of funny animations.
When he wins a match, you can hear several unique voice lines from the opponent, as well as different quotes from Goldlewis when he wins a round depending on the match timer. 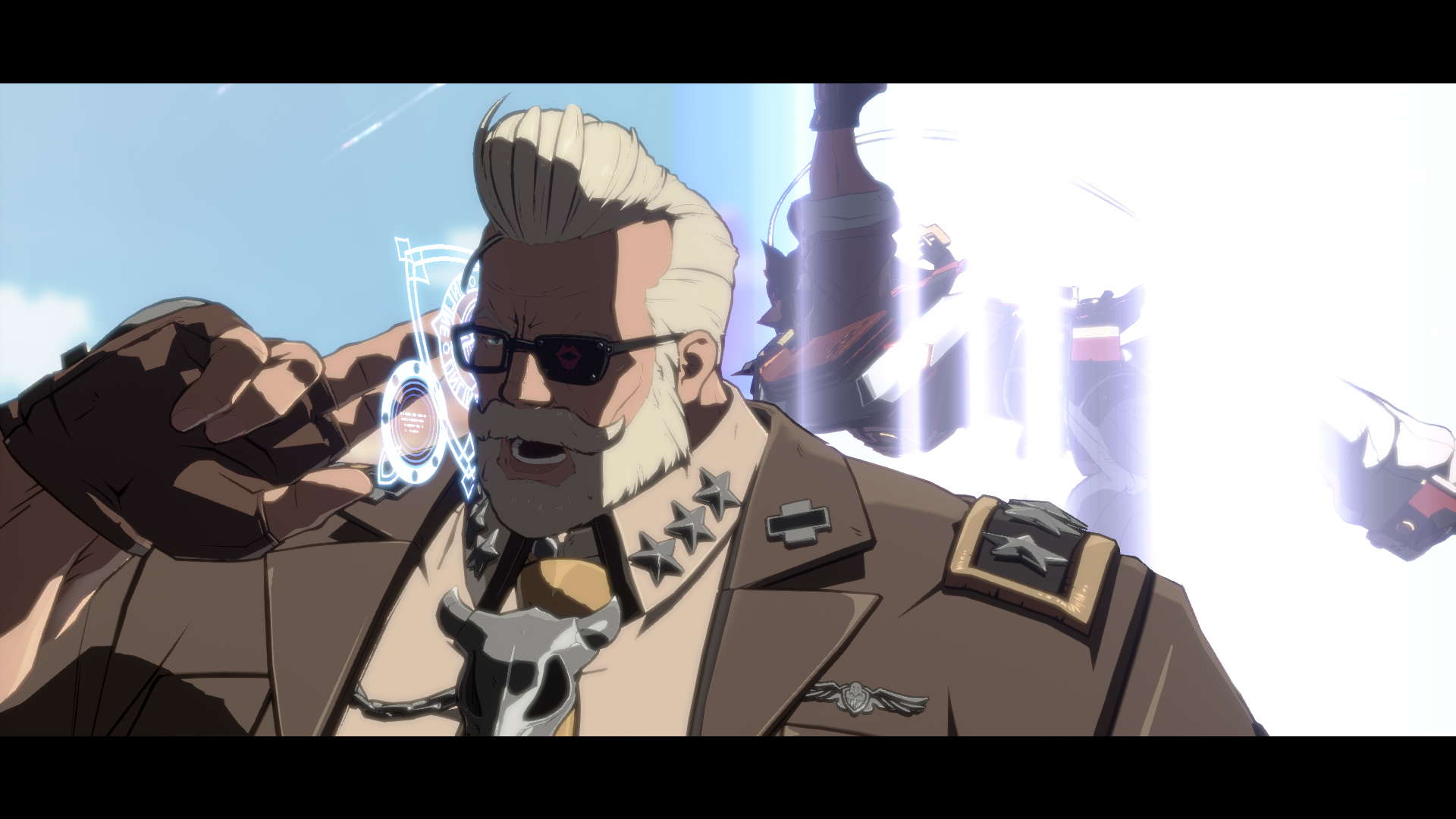 His battle style would fall under the power fighter category.
Each one of his attacks deals heavy damage, making him capable of showing a certain degree of strength even with only one-off hits.
His aerial attacks coming from his low-trajectory jump are especially powerful, meaning players can jump right into matches even only using his standard attacks.

He has a unique meter called the “Security Level,” and his projectile-based special moves power up as the level increases.
The level decreases after using these special moves, and increases as time passes.
When the level is high his projectile moves become quite strong, so the player needs to create a game plan based on their opponent’s character and the situation.

I believe the inputs for his "Behemoth Typhoon" special moves have also garnered some attention. 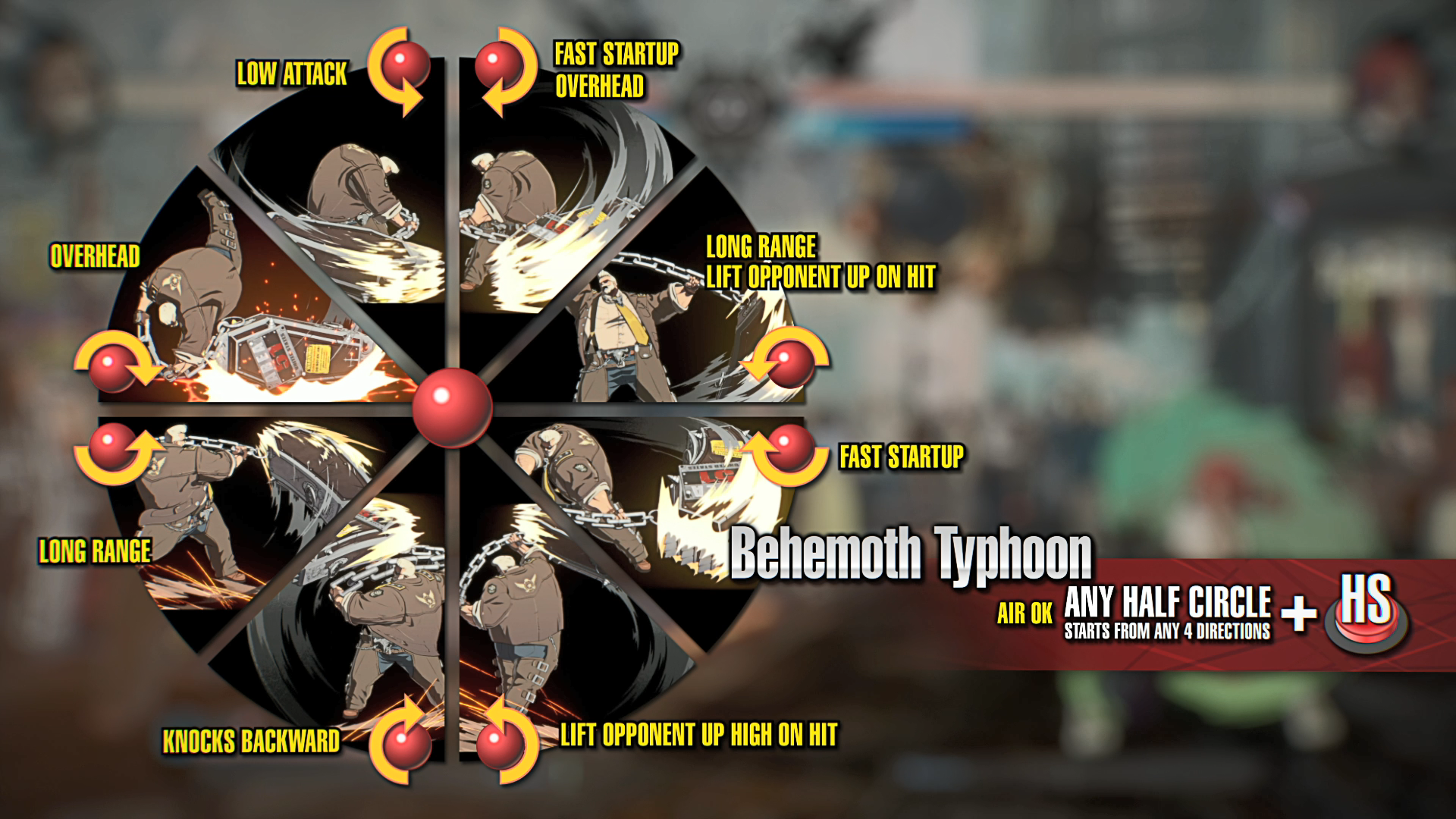 Behemoth Typhoon is a series of special moves where Goldlewis swings his coffin along the trajectory of the half-circle inputted, as seen above.
While the mechanic itself may be simple, inputs involving upwards inputs will cause Goldlewis to jump, making it necessary to cancel into them after another move such as a normal.

Unlike other inputs, Behemoth Typhoon requires the player to hold the final directional input.
This mechanic has been introduced to prevent unintentional inputs triggering the attack and to make the input distinct from his standard HS normals. Try keeping this in mind if you are struggling with the inputs.

Providing depth to simple mechanics is one of the main concepts behind GGST, something clearly expressed by this move and Goldlewis as a character.

You can start playing matches with him without using Behemoth Typhoon at all, and combos as well as basic setplay are all possible using only versions of Behemoth Typhoon without upward directional inputs, or only using the aerial versions.
Once you’re able to use each version of Behemoth Typhoon by canceling from normals, the amount of pressure you can put on the opponent multiples, and an even higher level of potential awaits depending on your creativity and precise inputs… Our intent was to make a character who shows increased power the more you practice.

Give him a try and experience his plethora of intricacies for yourself.
I’ve been playing Goldlewis in my free time, too.

We’ve heard from some players that they don’t know what to call him, since he is referred to as Secretary Dickinson in Story Mode, but now as Goldlewis.

In the Guilty Gear series, we refer to all of the characters using their first names to keep it short, unless there is a particular reason to do otherwise.
In this case, others use his family name in the Story Mode due to his position as the Secretary of Defense.

To make things clear, he will be referred to as Goldlewis in the game and official materials as this is his shortened name.
However, the way other characters refer to one another will depend on their relationship.
We apologize for the confusion, but we hope everyone can remember his full name, Goldlewis Dickinson.

We plan to release an update with battle adjustments during the latter half of August.
This is part of a two-step adjustment we are looking into by having another update around October.

In the late August update, our main goals are strengthening the characters we’ve determined to be lacking in power, and improving moves that don’t have enough options for use.
We plan to pinpoint the changes we make to specific targets, rather than making overall changes. That means some characters may remain unchanged.

We are considering changes to damage output or minor adjustments to the properties of overwhelmingly powerful characters and moves, however we will make these decisions very carefully.


With the second update, we plan to make detailed overall adjustments to improve the depth and fun of the game.
We’d like to address the details of this at another time, however as a general plan our number one priority is to make controlling the characters and playing matches more fun.


In addition, we will continue to address unintended issues with the game separate from the schedule above.
We’ve avoided making adjustments that would impact battle balance until late August, however we are aware that the effects of some bug fixes have impacted Zato’s Eddie moves, or made the game freeze when certain moves clash under specific conditions.


While we intend to address each bug in a timely manner, we may keep in some of the unintended effects we’ve found if we determine they make the game more fun.
While it would be difficult to share the basis for such decisions, we ask for your understanding.

We have confirmed the existence of both large and small bugs outside of battle, including those players have reported to us.
We appreciate everyone’s cooperation towards improving the game’s quality.

One particular issue we have noted as critical is a bug where the replay data cannot be played back correctly after applying the Goldlewis patch.
We will be fixing this bug within the month. We ask for your patience until the fix is available.

We are also working on making improvements to the play environment in each mode (including offline modes) to address issues such as the connection to the server upon launching the game taking a long time outside of Asia, as well as network errors occurring during Lobby and Player Matches.
Keep an eye out for an announcement regarding these improvements.

Next, I would like to answer some messages we’ve received from readers since the game’s release.

Is Goldlewis the guy eating a hamburger in the background of a stage in Xrd -Sign-?

A．That’s his brother.
Goldlewis is the younger brother, and the Sheriff is the elder.
The elder brother is also a capable man with a strong sense of justice. However, he finds constraints troublesome, so he chooses to live a carefree life as a Sheriff.

Will additional music that can be obtained via fishing be added in the future?

A．While additional songs will be added for future playable characters, any other music additions are being looked into with consideration for each circumstance.

For example, we have received requests to add the additional tracks from the Korean version of #Reload, and are currently working on getting them added to the game.
We are also looking into adding themes of characters who are not playable in GGST from prior series titles.

We have also received requests to adjust the volume balance for individual songs, as well as the option for random selection between songs registered as favorites.
We can only say we will be looking into this next for now, however we will continue working to approach an ideal implementation via future updates.

Will it be possible for the Lobby Avatars to actually use moves like Gunflame or Vapor Thrust when the player inputs them, or to perform animations with button inputs, or to roll dice, or play soccer?

A．We’ve seen your requests and would like to make them happen, however we are prioritizing improving the play experience during matches at the moment.

About the Next Volume of Developer’s Backyard

Katano:
That’s all for this volume of Developer’s Backyard.

While we will continue this project, we are looking into options such as live streams where we can directly exchange opinions with the players, in addition to the text format.

As both Ishiwatari and I are still quite busy, I can’t make any promises about when this would happen. Hopefully we will be able to make an announcement relatively soon.

EVO 2021 ONLINE, the largest international fighting game event, will be starting August 7.
Thanks to all of the support from our players, GGST has been selected as a main title.
Be sure not to miss the intense competition between top players from all over the world.

That’s all for Volume 7 of Developer’s Backyard.
Thank you for reading to the end.

We appreciate your support and would like your feedback in regards to our Guilty Gear -Strive- Survey.
Our goal is to improve the overall quality and enjoyment of Guilty Gear -Strive-, with your help we can reach our goal more and more.
Be sure to take the survey linked here: https://bit.ly/3lEgiA2