In this volume, we’ll take a look at some of the data collected from the Open Beta Test (OBT) survey answers.

As a total from all languages, we received approximately 51,000 responses to the survey.
Thank you to everyone who took part.

Which character did you use the most during the OBT?

Which character do you like the most in GGST?

Katano:
We asked for the characters everyone played most and their favorites separately,but the answers were more or less similar for both.
Ramlethal is extremely popular in every region, it seems.

It’s pretty unusual for the Guilty Gear series to have a new character placed highly in popularity rankings, but Giovanna is quite popular outside of Asia.
The results were really interesting, especially the differences between regions.

Katano:
Perhaps Versus Mode received a high rating due to the option to rematch without extra loading time.
It didn’t get as much play time, however, likely due to the effects of covid-19.

Tutorial Mode received mixed reactions. Some praised it for the unique freedom it gives the player, as opposed to a traditional textbook-style explanation. Others, however, pointed out that it lacks the explanations needed for an introduction to the game.
Our intent for the Tutorial Mode in GGST is to show the player that they can enjoy fighting games without having to study. We intentionally left out explanations of game mechanics and the different uses for each attack button.

In our previous games, players new to the fighter genre would need to put in some practice in order to complete the tutorial.

We checked the result data and replays from the first floor of the Rank Tower, and saw many matches where neither player used special moves or every game mechanic.
We will brush up on the finer aspects of this mode, but for the most part, we felt this style of tutorial was successful.

Also, in the finished game, the Mission Mode will include missions for practicing game mechanics such as Wall Break and Roman Cancels, combos for each character, as well as a variety of techniques. Players who want to delve deeper into the various mechanics or level up their game can look forward to that.

The Online Lobby is the area from the test we need the most work on, and have determined needs to be improved before release.
Even aside from the server issues, it was difficult to use and hard to understand how it worked.
Although we continually worked on internal improvements following last year’s closed beta test, we realize that we let everyone down.

Here are some of the plans we have to fix the issues:
・Changing to a system where players select a visible area where they want to have a match
・After winning a match, the player stays where they are in a battle-ready state unless their rating changes
・Adding a rematch option
・Expanding the area in each lobby, adding an option to hide the News display, and adding a dash movement for avatars

This will make the lobbies more like those in our other games. However, systems such as moving floors when your rating changes and the option to enter Training Mode while waiting for a match will remain.

We would like to conduct another beta test once these fixes are ready.

Although the Training Mode was praised for the number of options available, players also noted that the menu was difficult to understand.
We are looking into ways to improve the visibility of the menus for all modes. 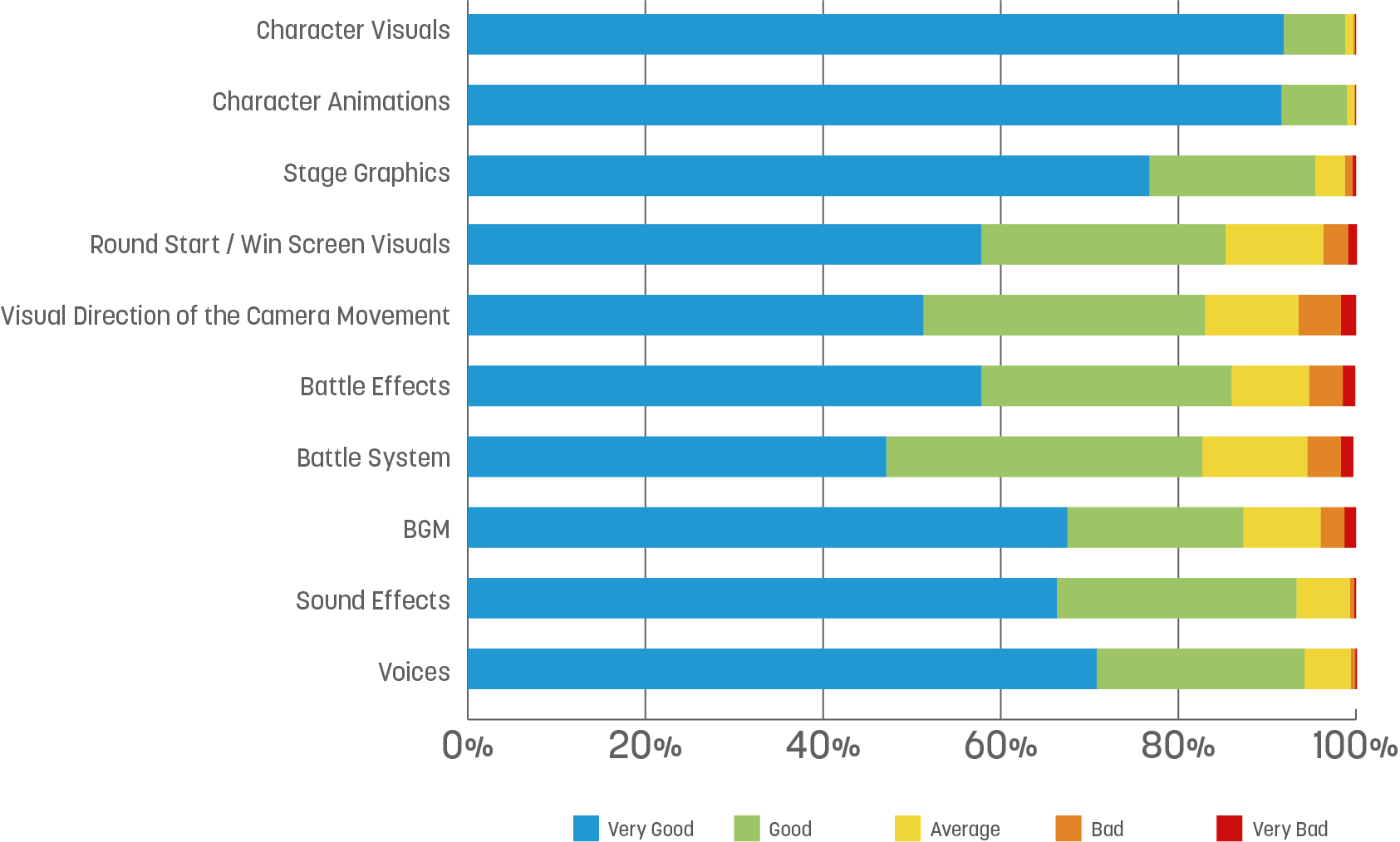 Katano:
We asked for opinions on several aspects of the game.
There was a form to write freely about your thoughts.
Let’s take a look at some of the opinions and requests we came across a lot.

First, regarding the visuals and effects, we received many comments stating that the game looks good, but there are issues with visibility.
In particular, many players encountered issues with characters blending into the background and being difficult to see, as well as losing track of the characters’ positions due to the camera effects.

With GGST, we’re trying our hand at using effects and visuals that are thought of as taboo when developing fighting games. The current state of the game is the baseline for our general direction, and we are still working on refining and improving it.
As far as issues with the characters’ visibility, we are looking into adding a setting so that each player can adjust it for their needs.

As for the music, we received many requests from players who want to be able to select songs from previous GG titles.
In the retail version of GGST, you’ll be able to purchase them with in-game currency and select them as your BGM.

Next, let’s discuss the battle system.
This covers so many topics that it may have been difficult to answer on the survey.
Answers on this topic had the most variation depending on what other games players have experience with and their region.
Let’s take a look at some of the most frequently mentioned key phrases from everyone’s answers.

① The damage is too high
Many players commented that the damage is way too high.
There were also many concerned that this is not just a problem with the game’s balance, but also takes away the fun of pulling off damaging combos.

After hearing your feedback, we plan to adjust the damage so that it is more suitable for how often and how difficult it is to land each attack. In general, however, the damage will remain high as that is part of GGST’s design.

It could be said that part of the appeal of the Guilty Gear series is the tension and exhilaration felt during the fast-paced matches.
In previous titles, however, the player could only experience this after practicing and learning complicated combos.
The length of the average combo is much shorter in GGST, so that more players than before can experience this.
This is why the overall damage is set high, including for single hits.
(There are also other elements influenced by this direction, such as our reconsideration of the frequency of combos in general.)

We’ve analyzed many replays from the beta test, and we feel the game mechanics are overall successful.

We are adjusting the game so that simple combos and situational combos each have their own merits--not limited to damage, but also in terms of meter efficiency and the situation you’re in after the combo.

② Roman Cancels are interesting, but I felt limited by meter use
Fans of the previous GG games in particular had positive things to say about Roman Cancels.
At the same time, many mentioned feeling restricted because the round would finish before they could use Roman Cancels how they’d like.

Taking this into consideration, we have reconsidered the general rules surrounding meter gain.
We didn’t simply increase the gain rate, but you should be able to use your meter more freely overall.

③ Jumping is too strong
Many players felt that the neutral game was lacking due to grounded anti-airs being too weak while aerial options were too strong, making jumping a common choice.

We also determined that this needed improvement, and have made significant changes.
I can’t explain each individual change here, but this is one point that will be a very noticeable difference from the open beta test.

④ Get rid of the infinites
Some characters had access to infinite combos.
In addition, there were notable instances of overly simple combo structures.
We are planning to deal with this by adjusting the game mechanics in addition to the character balance, so that these combos don’t end up as the most viable option.

For example, hitting an opponent with the same move more than a set number of times would make them float less.
This set number would be different depending on the move.
We don’t want to completely get rid of all loop combos, so we chose to increase the ways we can balance the game.

Please rate the comfort of the Online Battle

Katano:
The rollback netcode was highly praised, and we saw many matches between different countries and regions.

However, in some instances matches could become quite unstable, sometimes becoming incredibly slowed down.
We will be working on adjustments and improvements as the game’s release approaches.

As mentioned in the previous Backyard, we are still looking into whether we should allow the player to set their input delay based on the network connection, and how to handle filtering network connection strength.
We are hoping to conduct another beta test after fixing the bugs and improving the game systems, so we are planning to make these decisions after looking at the results from that test.

About the Second Open Beta Test

We are planning a second Open Beta Test based on the players’ feedback.
The timing has yet to be determined, so please keep an eye out for future updates.

About Future Volumes of Developer’s Backyard

That’s all for Volume 5 of Developer’s Backyard.
Thank you for reading to the end.

We’ve received many kind comments since announcing the change to the release date.
We’d like to thank everyone for your support.

Our team is working hard to make sure GGST will live up to everyone’s expectations.
Please look forward to its release on June 11.